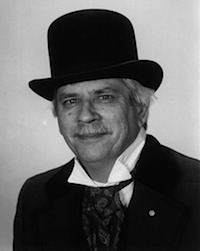 Every month we publish a column with inspirational quotes from famous and less known authors of the distant past — words that inspire, encourage and instruct. We select scripture verses that speak to us and, hopefully, to you as well. Thought provoking and soul feeding.

For more than 20 years now, we have been simply amazed at how many letters we receive every month, ranging from lengthy treatises on a particular aspect of shooting or collecting to short notes of commendation.

We give full credit to our wonderful subscribers who volunteer their time and effort in composing articles for our readers.

Click here for some of the remarks offered by our readers over the years.

Thanks for Visiting Us!

A Short History of The Single Shot Exchange

Hello, my name is Brett Boyd, founder of The Single Shot Exchange magazine. I thought you might be interested in a little background about our magazine launched over 20 years ago. I’ve had a passion for the great old guns for decades now. My frustration with ferreting out antique weapons from the ammo/camo crowd in existing magazines got the better of me back in 1991.

It was then I decided since there were no other magazines devoted exclusively to my personal area of interest—the firearms of the late 19th and the early 20th century—that maybe it was time to put together a monthly journal where us classic firearms aficionados could sit back and  reading through pages tailored specifically and exclusively to vintage arms.

In addition, I wanted to make the magazine a place to “exchange” information (hence our name) in a letters and queries column, develop community via phone, email and website; and exchange goods and services through buy-sell-trade classifieds and advertising. I wanted it to be a place where we could find the resources and expertise we needed to pursue our sport. Thus was born The Single Shot Exchange magazine.

Patterned after historic firearms journals of the era such as The Rifle and Shooting and Fishing (1885-1907), The Single Shot Exchange became just what it was intended to be then, as now, a place where fellow enthusiasts can share their experience and expertise in shooting, collecting and gunsmithing these classic old guns.
Whether it’s the BPCR silhouette, Schuetzen and long range game, or just plain “plinking”, nearly every aspect of antique firearms is explored by our contributing writers who volunteer their time and effort in supporting the goals of the magazine.
It has always been my experience that the gun cranks of the past and present provide a unique perspective to their area of interest and are able to convey their passion to our readers.

I have never really thought about our team of readers as subscribers, per se, but rather in terms of a fellowship of like-minded folks willing and able to share their interests.Seated man & shooter
Unlike most other publications, we don’t employ so-called “professional writ 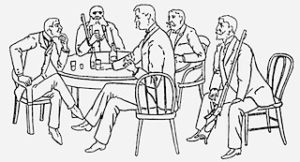 ers”;
The Single Shot Exchange magazine is reader written and the better for it. Articles are not a re-hash of something previously published elsewhere. They are rather refreshingly authentic and engaging as they reflect the knowledge, experience and interest of the subscriber-writer, whether in shooting, collecting or project work.

Articles written for or by the novice lend insight into the thrill of discovery as “newbies” check out vintage-era firearms. Click here to read “Catching the Single Shot Bug”, an example of one man’s delight in buying and shooting his first single shot, a 30-06.

For those of us who have been around antique firearms for decades, the fascination with these venerable old “smoke poles” seems never to lessen. Click here to read my story “A Dream Come True”.

In the Exchange, humor is not abandoned either in the re-counting of many a real-life anecdote. Click here to read “Inside the Gun Crank’s Head” by Carl Knutson, Jr. for a look at yourself in the mirror; it may give you a chuckle or two! 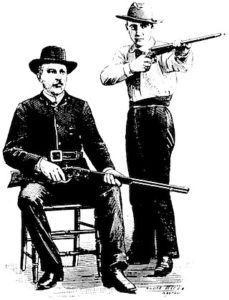 th century shooter’s humor is found in the pages of the The Single Shot Exchange. Click here for “Gun Stories from Yesteryear” featuring such an example—
the wry, tongue-in-cheek discourse “Observations on Rifle Shooting” written in 1889.
Other stories in this section include a poetic rendition—“Come From Your Rest, Old Rifle”, that speaks of one man’s love for his “dear old rifle”.

“Technical” stories from the 1890s are also reprinted for your reading pleasure, such as “The .22-Caliber Long Rifle Cartridge in a Stevens Rifle”. This short treatise on testing results of the .22 long rifle cartridge against the work of the .22 short also appears in “Gun Stories from Yesteryear”.
When you pick up an issue of the The Single Shot Exchange (also referred to as the SSE or “Exchange”), you can bet on a relaxing, informative read that may even tickle your funny bone here or there. Check out our website. I hope you like what you see. Feel free to contact us with questions or comments at singleshotex@earthlink.net or click here to post to our blog.