Editor’s Note: This article was written when Brett Boyd was publisher of the SSE.

A couple of years ago I came back to my birthplace in York, South Carolina after a career in the Pacific northwest. My cousin has an office in The Single Shot Exchange building and as a consequence I was a frequent visitor at this fascinating place. In addition to the guns, Kim and Brett Boyd are delightful people. Both of them have become good friends.

“Considering I have been carrying a shotgun since I was 10 years old and spent a tour in the Marines, I thought I knew a fair amount about guns. However...”

Considering I have been carrying a shotgun since I was 10 years old and spent a tour in the Marines, I thought I knew a fair amount about guns. However, in their office I saw guns I had never seen or even heard about. They were 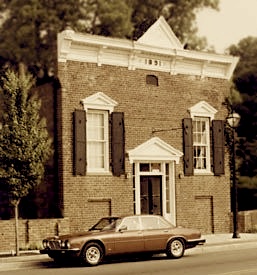 scattered around Brett’s office [photo at right] and presented a tantilizing look at the firearms of an unknown, at least to me, era. Rifles and shotguns made by Sharps, Winchester, Stevens, Remington and a host of other makers I had never heard of were available for my inspection.

My son, Chris who at this writing is serving with Sea Bees in Iraq, got bitten by the single shot bug first and bought a used Browning high wall Hunter rifle in caliber 30-06. This is a superbly accurate rifle and I was at once impressed with the small groups this rifle shot with factory ammo to boot.

Somewhere during last year’s deer season my Remington 700, which I used extensively for hunting, bounced or slid out of the back of my pick up truck, hard case and all. Back tracking the country roads and filing a “missing gun report” with the County Sheriff’s Office produced no results.

Not wanting to waste the time in getting a new gun and sighting it in, etc., I borrowed my son’s rifle. This turned out to be a neat rifle from the moment I picked it up. To my surprise, I quickly discovered the lure of these wonderful rifles as it handled like a well-balanced shotgun. Quick to point and, in this caliber, more than enough power for our local deer population.

This rifle was a natural for our hunts on our newly-acquired farm here in York County. I fired about three rounds through it to check my zero and proceeded to the deer stand.

It didn’t take long for a nice fat doe to appear about 75 yards away. Okay, you guys, if you like to eat venison, then the does are what you’re after. I fired one shot from Chris’ rifle and the deer collapsed. She did not move an inch from where she was standing. This was one rifle I really had confidence in from the very start.

It was obvious I needed to have a gun like Chris’. Before making this purchase I gave a lot of thought to buying a

single shot gun. However after going through the deer I had been fortunate to take, I realized that the need for a second was rare and on these occasions there was ample time to reload. A trip down to the Exchange brought some bad news. They didn’t make these rifles anymore.

My only hope was to find another used rifle, but wait, Winchester has just announced a special commemorative edition of this rifle celebrating the 100th anniversary of the 30-06 cartridge. I asked Brett to order one for me. More bad news, they won’t be available for 6 to 9 months! Oh well, order it anyway. We’ll use it next season.

After seven months, I received a call from Brett telling me that my rifle had finally arrived. [see photo above of Dick Bankhead and his new rifle.] I was in Florida at the time but scheduled to come to York in about a week. Needless to say, the Exchange was one of my first stops. Wow, what a beauty. The rifle was nearlyidentical to Chris’ Browning but with laser engraving and a gold medallion on the side indicating its commemorative status

[photo at right]. Featuring a 28″ tapered octagon barrel and checkered straight grip stock this is a wonderfully 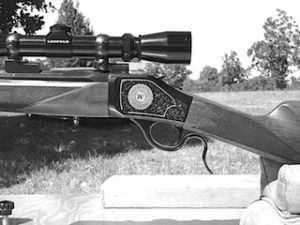 balanced rifle weighing in at about 7 1/2 pounds. Next we ordered a nice Leupold 2-7X scope and matching Leupold mounts for my new piece.

Brett kindly mounted the scope for me and bore sighted it. Then it was off to our little range down at my farm. A couple of adjustments and we were in business.

The pictured target with three shots in one ragged hole was shot with factory ammo at about 50 yards. The single hole just above the bull was shot by Brett after a little sight correction. 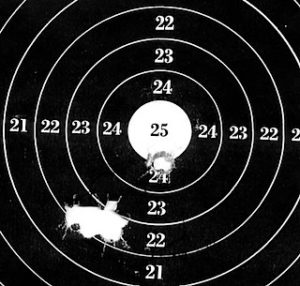 The 100 yard groups opened up slightly but well within hunting standards. Needless to say, I will be shooting a single shot 30-06 during the upcoming deer season.~