Why Not a .32-20?
by Paul Shuttleworth
A recent development in Schuetzen shooting has been the trend toward using smaller cases with less powder capacity than the original black powder cartridges such as the .32-40 and .38-55. Since smokeless powder has much more power per cubic inch, small cases have become equivalent to larger ones. The ratio by weight is about three to one. For example, the .32-40 using smokeless powder can generate the same velocity with 14 grains of smokeless that require 40 grains of black. In addition, much faster burning powder can be used; indeed, it is almost required for best accuracy.

One factor in using these small cases is that they are not traditional. They cannot be used for this category of competition as they are too recent in development. Now, what if there were a small case that is traditional? How about the venerable .32-20, dating from 1892? There are objections, of course. Isn’t this cheating? Schuetzen is a black powder sport, after all, isn’t it? In reality, black powder was being phased out a hundred years ago. DuPont #1 and Schuetzen powders are remarkably similar to SR4759. 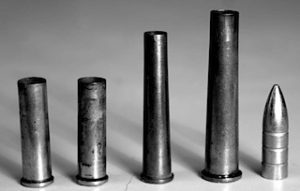 The .32-20 will generate 1375 foot seconds velocity with about 11 grains of Accurate Arms #9 powder. This sounds promising, but what changes have to be made to the chamber or cartridge cases? If you are breech seating, which practically everyone does, you don’t have to change either the chamber or the brass. This brass, incidentally, is available year round by the ton from many makers, and is priced reasonably, even cheap! Compare this with sizing, reaming, trimming and other joys to fit reformed brass into improperly dimensioned chambers. Now, if you want to shoot from the case or generate squib loads with seated bullets, you will need to open up the necks of the chamber and cases. More on this later.

If all this sounds too easy, you may ask how it shoots. The answer seems to be “just fine”. Apparently the bullets don’t know the difference, so let’s take a look at the results. Most people agree that to be successful at shooting for score from rest at the ASSRA target requires a rifle and load that can average no more than half a minute under ideal conditions. Take a look at the target illustrated. These six groups were fired consecutively, and the average of all these groups is exactly one half inch. It is a simple thing to shoot one very small group (a “pocket group”), but to be able to shoot a series of groups this small indicates real potential. If properly centered, all of the groups would add up to three consecutive 250 scores.

The rifle used for this shooting is a CPA Stevens made in bench rest configuration, and is shown in the photo. It is fitted with a Douglas .32 barrel with 15″ twist and tapered throat chamber, 1.19″ across the flats at the frame. The bench style buttstock is fitted with a drawbolt and the forearm is 2-7/8″ wide. Scope used is a 2″ Unertl programmer in 24 power, bases are spaced at 10-1/2″. All bullets were seated 1/16″ in front of the chamber with a 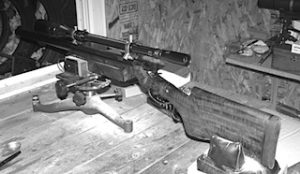 plugged case. Bullets used were Darr #36, cast from 1:24 alloy lubed with CPA lube, which is made from one third by weight Vaseline, one third Gulf wax, and one third Javelina Alox lube. Powder used is 10.7 grains of Accurate Arms #9, with a wet foam wad seated on the powder. Brass was Winchester, primed with CCI small rifle primers. This load has a standard deviation of 5 fps, which is reasonable, if unimportant. All things considered, however, I believe that this rifle and load at its present state is very competitive for any ASSRA or ISSA matches, and should be able to win its share of matches.

Should you want to shoot bullets from the case for short range squib load competition, it will be necessary to have the neck area of the chamber opened to take fixed cartridges. The above rifle has such a chamber, and will shoot fixed ammunition loaded with 125 grain bullets propelled by 3.5 grains of Unique at about 960 fps.~