by Paul A. Matthews

Almost every serious black powder cartridge rifle shooter has at one time or another acquired a quantity of lead alloy, contents unknown, that proves unfit for competition because of the excessive amount of lead left in the barrel. This is frustrating. Pre-mixed lead-tin alloys are increasing in expense on almost a daily basis, and to suddenly have a windfall of bullet metal that refuses to leave a clean barrel is almost enough to make one lock his rifles in the gun safe and forget about them!

The alloy in question is usually fairly hard and has a much lower melting temperature than the 30 to 1 or 20 to 1 lead-tin alloys normally used by dedicated BPCR shooters when casting their plain-base lead alloy bullets. And when you cast your favorite plain-base bullet of one of these low-temperature alloys, it makes no difference what bullet lubricant you use or what wad you use, you always find an excessive amount of lead left in the barrel, and accuracy has taken a hike. 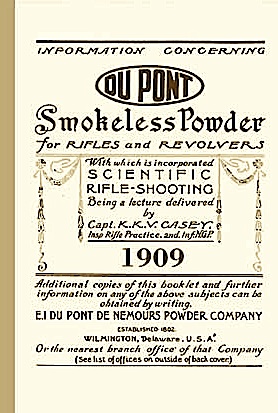 Conversely, when one is casting bullets for use in a high-power smokeless rifle, he almost always uses an extremely hard alloy having a low melting temperature. He then drives these bullets at much higher velocities than does his black powder counterpart, yet gets good accuracy with no leading problems. Why?

The deciding factor between the bullet being used by the high-power smokeless shooter and the black powder cartridge rifle shooter is a simple little gilding metal cup called a gas check! Despite this descriptive name, it is my opinion that the gilding metal gas check is a total failure when it comes to preventing gas cutting of the bullet. Since the gas check is crimped onto a shank on the base of the bullet, it is the last part of the bullet to enter the bore and seal the bore against escaping gases. If there is any gas cutting of the bullet, it has already happened long before the gas check enters the bore. More than that, leading due to friction occurs with or without escaping gas. If this is true, and I believe it is, then why don’t we see evidence of lead in the barrel when using a gas-check bullet at modest cast-bullet velocities?

The second significant function of the gilding metal gas check— the one most often overlooked and unknown by many—is that the gas check acts as a scraper and scrapes out most normal lead deposits left by the passage of the bullet, thus giving the impression that there was no lead left in the bore in the first place.

With all of that said, and as supporting evidence of what was said, about two years ago Brian Chilson acquired half a ton of good clean lead-alloy ingots. The metal cast beautiful well-filled-out Creedmoor-style bullets that, when fired in his black powder cartridge rifle, left an excessive amount of lead in the barrel and destroyed all semblance of accuracy. Being short on time, Brian switched back to his standard 20 to 1 lead-tin alloy and gave me about a hundred pounds of the unknown alloy to see what I could do with it.

Using the original Ideal-design Postell bullet as the test bullet, I tried varying the alloy with the addition of a small percentage of tin and then by adding a quantity of soft lead equal in weight to the amount of original alloy. I tried different wads as well as inverted gas checks, all without success. No matter what I tried with that plain-base bullet, severe leading in the breech-end of the barrel occurred during the first few shots. The project was set aside, but not forgotten.

Now over the years, long before the black powder cartridge silhouette addiction swept the country, I was shooting hundreds, if not thousands, of rounds of lead-alloy bullets cast of all kinds of scrap alloys in a dozen different rifles of various calibers without a hint of trouble in the leading department. The big difference was that the loads involved all used smokeless powder and gas-check bullets, some at much higher velocities than the black powder

The conclusion is that if you have an unknown lead alloy that casts good bullets, but that gives severe leading problems with plain-base bullets, you can usually correct that problem by going to a production gas-check bullet, or by having a custom mould cut for your favorite plain-base bullet re-designed to incorporate a gas-check shank that will accommodate a crimp-on gas check. This gas check will scrape your barrel clean of lead fouling after every shot! While gas-check bullets are not legal under NRA rules for black powder cartridge silhouette competition, using these bullets for practice will at least save your good 20 to 1 or 30 to 1 bullet metal for competition.

I want to emphasize that the three RCBS moulds mentioned were purchased some thirty to thirty-five years ago and, as such, had the small radius grease grooves popular at that time. The present day design of these same bullets has been changed to incorporate larger flat-bottomed grease grooves for use in a black powder cartridge rifle.

Another production gas-check bullet that I have recently become aware of, but which I suspect would be an excellent choice for the 45-70 or 45-90, is the Lyman No. 457671 bullet.

This bullet has a catalogued weight of 475 grains when cast of Lyman’s No. 2 bullet metal, and looks like a shortened version of the Postell bullet, but wearing a gas check instead of the usual plain-base. By the time you read this, I expect to have a mould for this bullet.

Whether or not the NRA Rules Committee will ever lift the restriction of gas-check bullets for black powder cartridge silhouette competition is questionable. Certainly, the gilding metal gas check is not traditional, but neither is the low-density polyethylene wad which is used quite extensively in BPCR silhouette competition and, due to its built-in memory, is more of a true gas check than the gilding metal cup.

With the price of pre-mixed lead-tin alloys running well over two dollars per pound, if we want our sport to grow, we have to make it within the financial reach of the younger set, even if it means less expensive low-temperature scrap alloys of dubious content that require the use of a gas check. After all, as far as the black powder cartridge rifle is concerned, the only advantage of the gilding metal gas check on the tail end of the bullet is one of economics. At black powder velocities and relatively slow barrel twists, the metal gas check does nothing to enhance performance in the black powder cartridge rifle!~